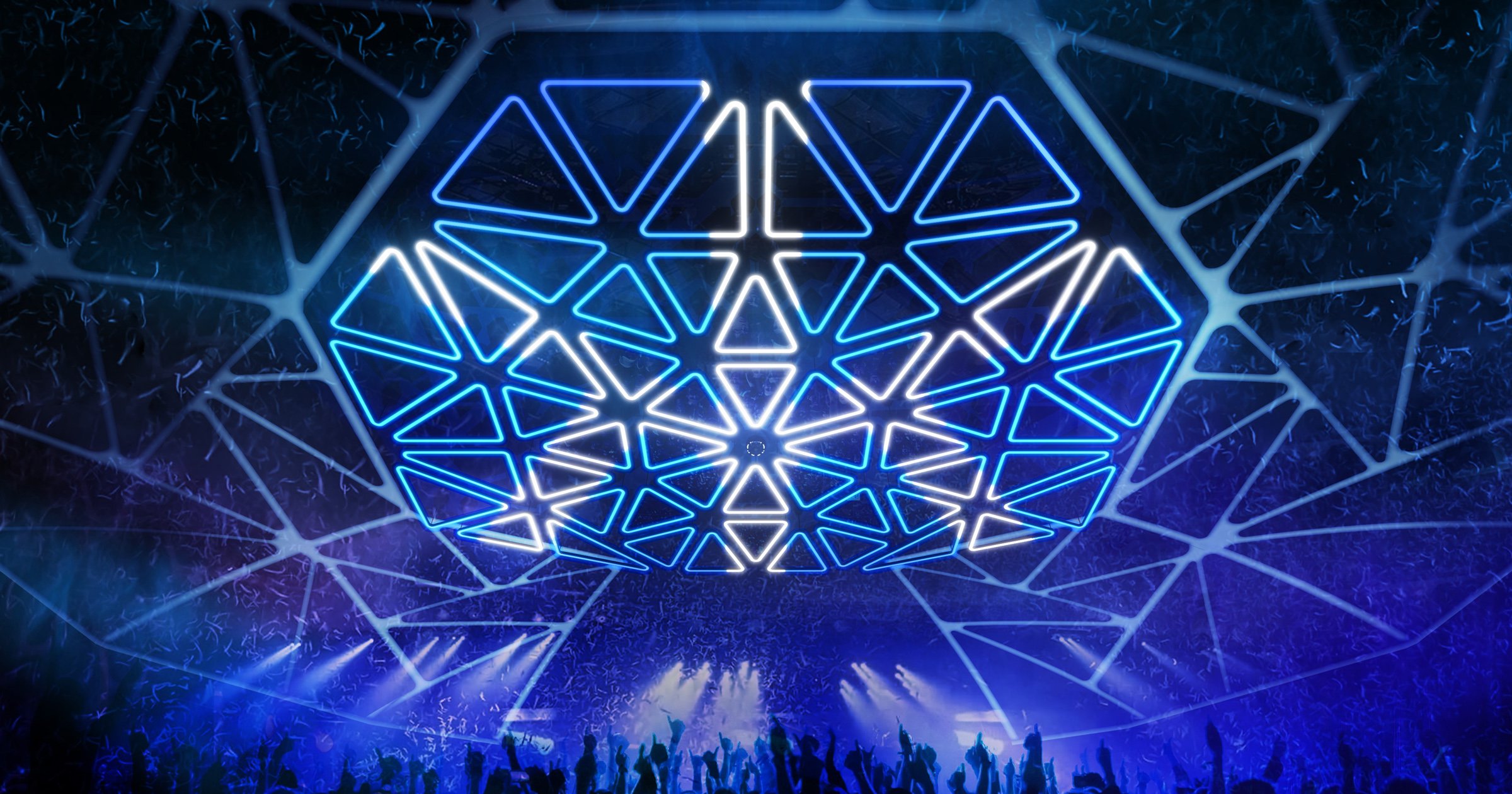 Recognized for providing unforgettable experiences at its venues across the world, global hospitality leader Hakkasan Group has yet again raised the bar with the technology-driven and artistic transformation of its flagship Hakkasan Nightclub at MGM Grand Hotel & Casino in Las Vegas, Nevada. This May, the five-level mega club will unveil the Hakkasan Grid, a multimillion-dollar, custom-built kinetic light installation that will set the benchmark for luxury nightlife throughout the world and break down silos between entertainment, art, and technology.

Set to be unveiled during the week of Electric Daisy Carnival Las Vegas (EDC), the Hakkasan Grid is an awe-inspiring pièce de résistance that will enhance the venue’s design and transform the show experience for audiences like never before. An architectural feat, the Hakkasan Grid is the largest permanent kinetic light installation in the United States, made of 57, 4-foot seamless and sculptural triangles that combine to form a 30-foot showpiece. Connected via 169 high-precision winches, the centerpiece can transform with the nightclub’s musical landscape into infinite shapes and colors above the dance floor. Each triangle was custom-designed and 3D-printed with premium materials from the brand KINETIC LIGHTS located in Berlin, Germany and features pixel-mapping and color-mixing technologies, making the grid the only structure of its kind that allows fully-customized images and patterns to flow seamlessly across all of the triangles both individually and collectively. 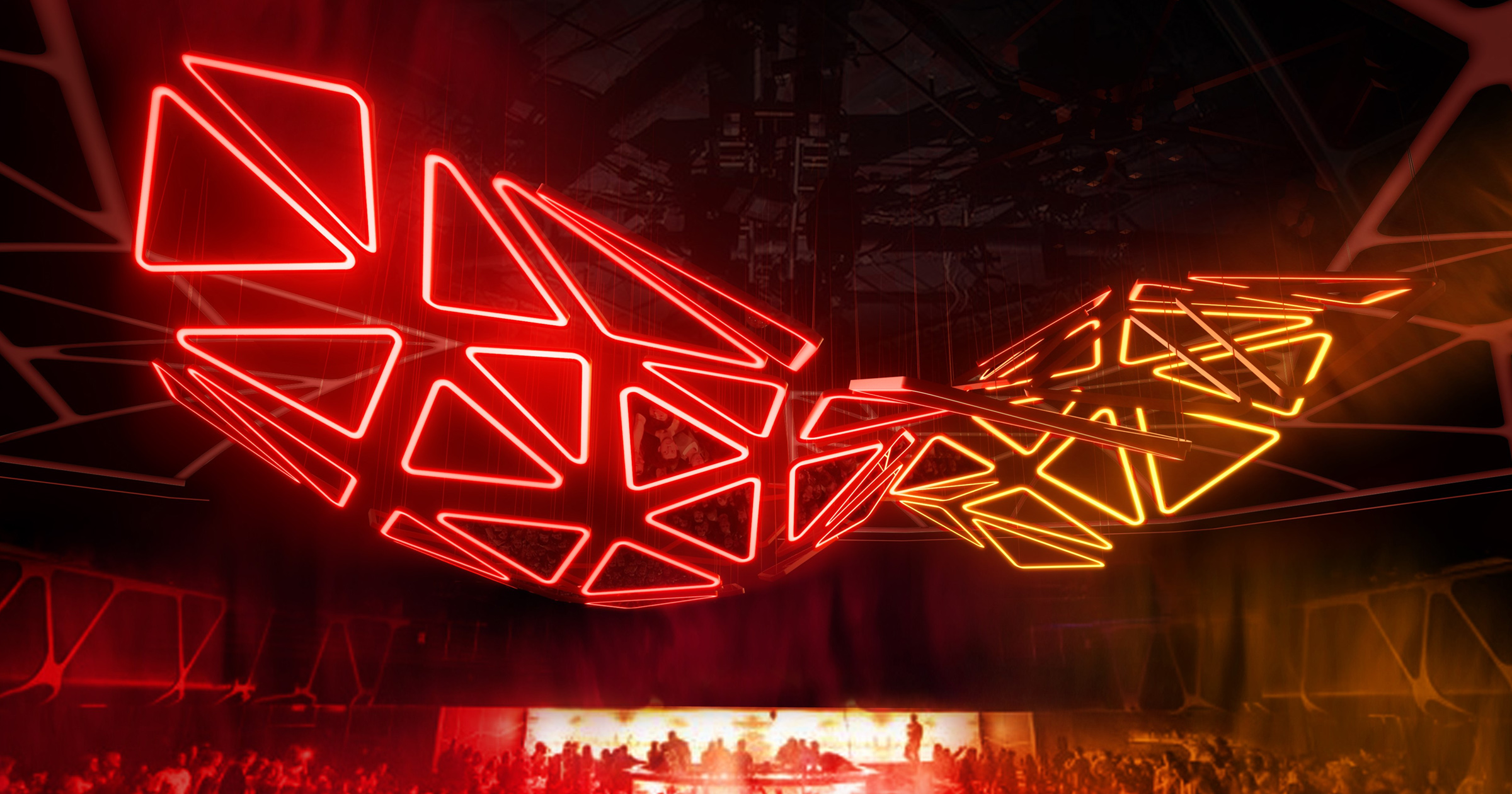 Controlled by a proprietary and custom software solution, the Hakkasan Grid can reshape and recolor itself in synchronization with live music, elevating and enhancing the energy within the nightclub. The Hakkasan Grid is made from the latest 3D-printing technology in order to meet the unprecedented architectural demands of this elaborate and high-powered structure. The Hakkasan Grid will be fully incorporated into the venue’s star-studded 2019 Vegas residency performances, which feature top names in music, such as Tiësto, Zedd, Steve Aoki and more.

“The nightlife industry requires constant evolution and excellence, and we pride ourselves on consistently rising to this challenge and providing our guests with unforgettable, transformative experiences,” said James Algate, Executive Vice President of Entertainment at Hakkasan Group. “We’re thrilled to yet again push the boundaries of nightlife with the new Hakkasan Grid. We’re confident that guests will be blown away by this futuristic, multisensory experience we’ve created.”

Hakkasan Group tapped WHITEvoid, an award-winning design firm based in Berlin, Germany to bring this project to life featuring custom-made products by their in-house brand, KINETIC LIGHTS. Well-known for their light art and kinetic audiovisual sculptures, WHITEvoid has showcased its works at countless prestigious events and venues around the world, including Milan Design Week, MUTEK, The Festival of Lights, CTM Festival, The National Centre for the Performing Arts in Beijing, Centre Pompidou in Paris and more.

The Hakkasan Grid evidences yet another way Hakkasan Group has incorporated state-of-the-art technology and dramatic design elements to push the boundaries of the nightlife industry. In 2015, the company unveiled a kinetic chandelier in OMNIA Nightclub that raised the bar for nightclub design.

To download renderings of the Hakkasan Grid, please visit this link.

Hakkasan Nightclub inside MGM Grand Hotel & Casino is the bold evolution of the global restaurant brand, creating an all-encompassing nightlife experience with a variety of atmospheres and world-renowned musical talent. The five-level destination is home to the Ling Ling Lounge, Ling Ling Club, Main Nightclub, Pavilion and Mezzanine, where guests are welcomed to fully immerse themselves in a diverse nightlife experience. The venue features cutting-edge technology and inspired design allowing for top-tier artists to provide unique show experiences each night. Enveloped in a complex of refined decadence, Hakkasan Nightclub provides guests with an unrivaled evening weekend after weekend.

Hakkasan Group is a worldwide hospitality company with establishments across North America, Europe, Middle East, Asia and Africa. Its namesake is taken from its Michelin star restaurant that set the high-level standard for the group’s collection of diverse brands. Its ‘brand first’ philosophy builds restaurant, nightlife, daylife and soon-to-open hotels, resorts and residences into world-class hospitality brands, all with a focus on service, design, innovation and experience. Its restaurant portfolio includes Hakkasan, with 12 locations worldwide, Ling Ling, Yauatcha, Sake no Hana, Herringbone and Searsucker. Under the nightlife umbrella is Hakkasan, OMNIA, JEWEL and 1 OAK Nightclub; and daylife brands include WET REPUBLIC, LIQUID, and OMNIA.

"Never-before-seen, multimillion-dollar multimedia installation ushers in new era for the legendary nightclub as the largest permanent kinetic light installation in the United States"